Warning: A non-numeric value encountered in /home/customer/www/socihacks.com/public_html/wp-content/themes/startit/framework/modules/title/title-functions.php on line 446 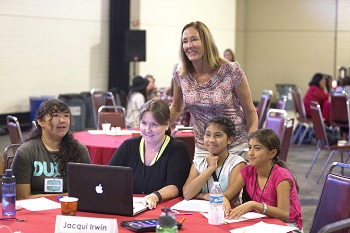 What is the sound of 100 girls discovering their infinite potential? “At first it’s very quiet as they get to know each other,” says Melissa A. Carlysle, co-founder and CEO of SOCIHACKS™: Hackathons for Social Good. Very soon, however, “It’s all-out noise!” Carlysle should know because she and SOCIHACKS co-founder and executive creative director Allison Carlysle are the driving force behind the second annual Girls in STEM/STEAM Hackathon. The free event, co-hosted by the Small Business Institute of California State University Channel Islands, takes place on Saturday, April 2. Its goal is to inspire 100 girls, ages 8 to 13 and from underserved areas throughout Ventura County, to delve into science, technology, engineering, art and math — or STEM/STEAM. The girls will enjoy a day of hands-on learning as they work in small groups to develop websites and videos. The theme, in honor of Earth Month, is the environment and women environmentalists.

Mentors include faculty from CSUCI as well as women in the technology, business and creative fields. Some of the women sharing their expertise will be Navarre Sisler of Hole in the Fence Productions and Frankie Certain of AMC Photography. But this really is the girls’ show, with the adults serving as facilitators of the participants’ visions and creative processes.

Each group will be named after a female environmentalist. One is sure to be named after Lupe Anguiana, who will be speaking at the event. As a civil rights activist and environmentalist, Anguiana marched with Cesar Chavez, helped organize the United Farm Workers and the National Women’s Political Caucus. An advocate for the rights of women and the poor, Anguiano is also passionate about the environment and works with the California Coastal Protection Network.

Also speaking at the event will be Jim Hines, conservation chair of the Los Padre Chapter of the Sierra Club. Hines will talk about local and global environmental issues, and discuss the Channel Islands and how we can all help protect them.

This melding of STEM/STEAM with environmentalism and civic responsibility makes perfect sense to the organization’s co-founders. Their interest in the environment was sparked during an Upward Bound program when both Carlysles were teenagers. In college, Melissa became interested in sociology and community affairs. Allison studied computers and soon realized that she was often the only woman in her IT classes. Together, they decided to create SOCIHACKS: Hackathons for Social Good.When they came to Ventura County about a year ago, they realized that girls in low-income areas were not getting the STEM/STEAM resources and instruction they needed. They saw an opportunity to “provide the tools for girls already interested in STEM/STEAM fields and to spark a fire in those who may never have had the opportunity to explore them.”

The Hackathon focuses on girls between the ages of 8 and 13 because Melissa and Allison believe it’s important to reach girls while they’re very young. Stoking their interest and passion in STEM/STEAM now helps them stay interested in high school, college and beyond. Today, women make up 47 percent of the workforce but are much less represented in the fields of science and engineering. For example, in 2014, per the U. S. Department of Labor’s Bureau of Labor Statistics, roughly 39 percent of chemists are women, while only about 28 percent of environmental scientists and 7 percent of mechanical engineers are women. The statistics are alarming and threaten to grow even worse if more girls aren’t brought into the fold.What is promising is how engaged girls become when they do have the resources and support to learn STEM/STEAM. The Hackathon promises to be inspiring and eye-opening, not just for the girls, but for friends and family who will watch the girls present their projects at the end of the day.